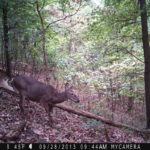 Close but no Cigar

Matt Sipling got a late start to our lease this morning and decided to hunt a stand called the Saddle Stand. The stand sits on a point of a couple saddles coming together. We have been getting frequent pictures of a group of 6 or 7 does at this spot on a consistent basis. The wind was calm and the squirrels were very active. Around 8:25 a.m. all the squirrels started “barking” and ran up their trees and for 5-10 minutes it was dead silence. The silence was borderline creepy. He grabbed his bow expecting to see a coyote, or maybe even a bear. Instead, what he saw was deer legs moving through the brush. In the back of his mind he is still wondering what is down below. The deer were feeding on acorns for approximately 10 minutes before a year and a half old doe had passed through his shooting lane at 30 yards. He let it walk as there was a bigger, dark colored doe in the group that he has been trying to kill for 4 years. The first deer made it about 10 yards when a deer about 80 yards out snorted and they all took off up the mountain. We still don’t know what spooked the deer, but we do know it was bad timing for Matt.