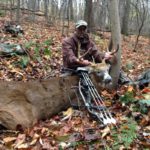 The morning started dark and early as 3 of us headed up to the bow creek lease. We knew we needed 45 minutes to an hour to hike to our spots without working up too much of a sweat. Temperatures were already in the 50’s and it was 5 a.m. Part of the conversation on the ride up was how hunting gets better after Halloween. It doesn’t get better because of deer movement, it gets better because we all have young kids and that means finding snacks to fill up our backpacks is much easier.

As we get settled in our stands, deer movement starts almost immediately. Matt Hahn and Bob Claar each see the same four point. Matt Sipling had 2 shooters approaching his stand at about the same time. The first was a nine point named Houdini. Matt missed this deer about ¾ of a mile east of here Tuesday night. The second deer was Swoosh. Unfortunately the wind switched at just the wrong time. Houdini was at 30 yards and following a trail that would have taken him 5 yards from Matt’s stand. Swoosh was following about 50 yards behind Houdini. Houdini got Matt’s wind and was gone in the blink of an eye. Swoosh stood still for a couple seconds and followed his buddy back down the mountain. The wind switched back to a North wind about 5 minutes later. A little while later a doe and a doe fawn fed past Matt’s stand at 12 yards.

These two bucks were the 5th and 6th shooter bucks Matt had seen this week. Frustration was starting to set in. He didn’t know whether to be happy that he was seeing bucks, or snake bitten. Right around the time his pity party had started he was scratching his back when he heard a stick crack. He looked to his right and saw a 8 point standing just 30 yards away. The 8 point was looking his way. His first thought was here we go again. After all, the 8 point was interrupting his pity party and luck really hadn’t been on his side. Matt wasn’t sure what deer it was at first. The buck kept walking up the mountain and turned left on a trail that would take him by Matt at 12 yards. The buck stopped and started making a rub on a small pine tree. Matt was trying to figure out what deer it was. At first he thought the deer was too small. He wasn’t sure whether he wanted to shoot it or not. He thought the deer made the decision for him as the deer turned around and started heading to the right. For some reason the deer turned back around, stood on its hind legs, rubbed it’s orbital gland on an overhead branch, and made a scrape. The deer then continued down the old logging road. It had its head down as it was walking, and it was then Matt realized this is a buck they named Lefty for his long brow tine on the left side. The deer continued walking and just as it got broadside a doe bleated behind Matt’s stand. Lefty turned and is now head on with Matt. He grunted a couple times, but he wasn’t really interested in the doe. He headed down the trail and presented Matt with a 12 yard, quartering away shot. Matt let the arrow fly, and it hit its mark. The deer was down within 60 yards. It was a Halloween to remember.