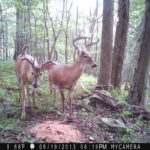 A Week of Bad Luck

Matt Sipling missed the buck on the left today. The buck now has the nick name Houdini. The arrow skipped right off the deer’s back. Other than that, it was a good day. This was the first night we had seen more than one shooter off of natural movement. Two minutes before Houdini showed up, “High Brow” passed by in a thicket at thirty yards. High Brow took the trail on the right to scent check some does that were hanging out on the woods edge. That trail took him 70 yards away from the stand. About two minutes later Houdini showed up.